Everything has a story.

In my heart, I’ve always been a story teller.  In fact, when I was in kindergarten, at the end of the year everyone was given their own award to celebrate something unique about them. I was given the “most creative story-teller” award.  Years later, I would come to realize that my kindergarten teacher was calling me a little lying bastard, but hey, it’s an honour just to be recognized.  (My brother got the “eye-roller” award, which I guess is kindergarten teacher code for “sarcastic little asshole”).

In my first post, I talked about being a creator, and I believe that in order to create, there has to be a story. That holds true for all art-forms, whether it be literature, films, theatre, ballet, music, architecture, fine art…you name it.  Expression starts with the story.  Even when it comes to woodworking, for me, the love of the craft, and my love affair with furniture, begins with the story.  This is the real reason I hate mass-produced “Ikea” style furniture.  Aside from the fact it falls apart and the instructions fill me with hate, it doesn’t have a story.  If the only thing you can say about that bookshelf you bought is I saw it in the catalogue, and I bought it and took it home – those things happened, then to me it doesn’t have very much worth.

I have pieces like that in my house – remnants of when we were in university and couldn’t afford anything else – and over time, I’ve been slowly replacing them for the things that have a story.  A story that came with them, or one I created myself.  I’m going to relate two such stories:  One about a piece that came with a great story, and one that I created through thrilling adventure.

Got your attention now don’t I?

When I got married, my dad asked me what I wanted as a wedding gift.  We weren’t getting married in a traditional church, so I had this thought that there wasn’t going to be pulpit for the minister (who is one of my oldest friend’s dad-Wes) to perform the ceremony.  I’ve wanted one of my dad’s pieces for a while. They’re very special to me, for two reasons:  one, because he loves woodworking and takes great care to build beautiful and sturdy pieces, and two, because he builds them out of garbage. More specially, he builds them out of shipping pallets.

Pallet projects are all the rage right now, and even I’ve been swept up in it lately, what with Esty and Pinterest, but seven years ago, people weren’t building things out of pallets.  My dad did it before it was cool. Which I guess kind of makes him a pallet hipster (which I think is funny, if only that he’ll never get that joke).

My dad runs the shipping department of a factory, and there’s pallets everywhere. He takes as many as he needs, tears them apart and builds magnificent things out of them.  A popular technique with pallet projects is to leave the pallet rough, for that rustic look.  I really like that look, and would do my stuff that way. Not my dad.  He lovingly sands, planes, and polishes every piece so it looks brand new, then he finishes his projects with about 7000 coats of high-gloss Varathane, so the reflected rays of the sun could blind a person from 300 feet.  The result is stunning.  So with much trepidation, I asked him to build us a podium to be married in front of.

To be honest, I kind of expected my dad to say no.  Realistically, he lives on the west coast, and didn’t own a truck at the time.  Shipping it would be expensive as hell.  However, once my dad gets an idea in his head, there’s no stopping him.  I would have no further input into that one.  No pictures, plans, progress reports.  Nothing.  The only thing I heard was he bought a roof rack for his Taurus, and was going to strap this thing to the roof and drive it through the Rockies.  Madness.

I’ll never forget the day he arrived.  I don’t know if he was trying to prove a point, or it was just the materials he had on hand, but he built a gigantic crate out of pallets to hold the podium, then by some miracle hoisted this behemoth onto his car, strapped it down, and drove 1200 kilometres through the mountains, a total of sixteen hours driving, in one sitting.  I swear this thing was half the size of his car.  When we finally got it down and opened the crate, my heart skipped a beat.  It was beautiful, hand crafted, and mine.  It is truly one-of-a-kind.  When I asked him what he made it out of, he grinned, snapped off a piece of the crate, handed me a gnarled, filthy piece of wood and said “this”.  We were married in front of it, all the wedding reception speeches were performed behind it, and it has a place of honour right beside the front door in our house, where it will stay our whole lives together.

AND NOW FOR THE THRILLING ADVENTURE!!!

I’ll bet you forgot all about that, what with the touching father-son moment I just had.  Well, here it comes.

Actually, it starts off rather mundane.  I really wanted a new coffee table for our den, because the one we bought as part of a set was ugly (I picked it, so I can say that), and made of cheap materials.  As a teenager, I was a Sea Cadet (yeah, I live in a land-locked province and the nearest ocean is 1000 km away…these are things I know and overlook). I’ve always been drawn to nautical styles, and at some point about three years ago, I became enamoured with the idea of a cable-reel coffee table. Something about re-purposing a cable-reel into a furniture piece really appealed to me, and that “rustic look” I spoke about earlier would be a nice contrast in our home.  So I started looking for one.  And I kept looking.  And I found nothing.  For months.  At first, people told me it would be easy to find one of these things, because they are literally everywhere. Well, those people are idiots, because I couldn’t find one anywhere.  I started to become obsessed.  I trolled construction sites, scoured the internet.  Nothing!  I became Captain Ahab, searching the earth for my white whale.  I went a little nuts.

That summer, I was working for a day camp between semesters at university, and was driving with my boss to a ranch outside of town.  On the way was a massive road construction project.  I started to feel the call.  My reel was nigh.  As we were passing a turn pike, I saw it.  I can’t be sure, but I’m convinced a light beam from heaven struck it and a chorus of angels sang out. It was magnificent.  I cried out in ecstasy and my boss nearly crashed her car, and I noted the position for later.

After work, my mind was laser-beam focussed on claiming my prize.  It was a hot day, and the forecast called for extreme thunderstorms, but I ignored that.  No force on earth could keep me from my reel!  As I crawled along in rush hour traffic, my anticipation grew to fever pitch.  I finally broke free of the traffic and headed north…into the craziest storm I have ever seen.  That’s saying something, since I’ve been on one side of a lake when a tornado hit the opposite shore.  The closer I got to my exit, the worse the weather got.  The rain came down in sheets, and I couldn’t even see the road.  Hail the size of marbles pelting my car and getting bigger by the second.  Wind gusts so strong that I nearly broke my arms trying to keep my car on the road.

Then the electrical storm hit. 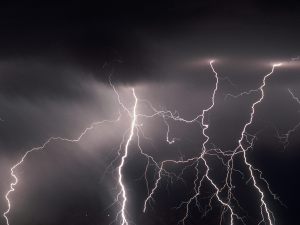 I’ve never seen anything like it.   Flashes that lit the whole sky, and the thunderclaps  that hit directly after were deafening.  Lighting rods that seemed to arc right in front of you.  And getting worse every metre I drove.  At this point, I realized I could very well die a horrible death over a goddamn coffee table. I have never been so terrified in my life.  Just as I came up to my exit on the freeway, I passed a lamppost. As I passed it, a bolt of lightning zapped down and struck the post, making the lamp explode right beside me.  I screamed, and felt the force of the electrical discharge hit me in the chest like I’d been kicked by a mule.  I could feel the electricity in the air, and all the hair on my body stood straight up.  The stink of ozone burned my nostrils. I said aloud, screw this, I’m done, and I got off at my exit.  As I turned west, almost by magic, the storm abruptly stopped.

I got near the point where I’d seen the reel, and decided I’d lived through too much not to get it, so I pulled over when I saw it.  It seemed different than I remembered.  Farther away somehow.  I parked, got out and started walking. And walking.  And W   A   L   K   I   N   G.  I walked two hundred metres before I got up to it.  As I walked towards it, it got bigger. And bigger.

When I finally came up to it, I laid my hands on it, to behold the biggest cable reel I have ever seen. Earlier in the day, I had remarked that I hoped it would fit in my station wagon.  I don’t think it would have fit in my garage.  It must have needed it’s own big rig to carry it.  It was at this point that I started to laugh.  It looked tiny  from the road, but it was an optical illusion.  I had obsessed over this stupid thing for months, driven myself and my family mad, and nearly died for a coffee table, and it was half the size of my house.  I sat down and giggled like an idiot for ten straight minutes.

That’s not really where the story ends, because I have a cable reel table.  Months later, after I’d given up,  someone responded to an add I had placed.  This guy had over 100 good-sized cable reels for sale, cheap.  I have no idea where he got them, or how, and I didn’t want to know. Plausible deniability and all that. So my wife and I went out of town and picked up two.  From the scariest pair of hillbillies I’ve ever met.We paid cash, and got the hell out of there as fast as we could. They aren’t small.  42 inches in diameter. They weigh 168 pounds each, and are made of solid fir.  Turning them into coffee tables was a great challenge, made even more ridiculous by what I had to go through to get them. 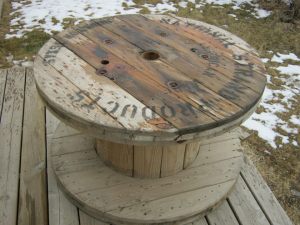 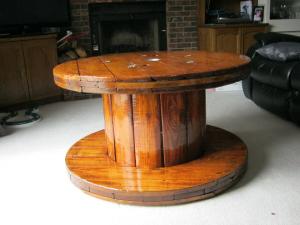 But someday, when my kids ask me what’s deal with that table? I can tell them that story, and to me, that makes a piece of furniture more special.  I want every piece in my house to have a story, because stories give life colour and flavour.  Would I recommend a death-defying drive through an electrical storm for the sake of a story?  Of course not. That’s insane. I’d never do that again!

But then again, you bet your ass I would.